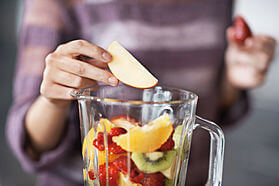 The main feature of a hybrid system is the use of two or more different electricity sources.

Alongside solar energy, photovoltaic hybrid systems generally employ a diesel generator, a wind turbine or the public grid as a further electricity source. The inverters used in hybrid systems, which have integrated battery chargers, supply the connected AC loads according to demand from the battery bank of solar energy or the second electricity source. These devices also allow the batteries to be recharged from the extra energy source.

Photovoltaic hybrid systems offer the advantage that the solar generator does not have to be significantly oversized for periods of low sunlight. This avoids substantial costs. When selecting its energy source, the system always gives priority to the energy provided by the module. In combination with a controllable second source, the energy supply remains reliable and available 24 hours a day, all year round.

The central, intelligent element within the system is the Steca Tarom or Power Tarom solar charge controller (B): it controls the energy flow and protects the battery against critical states. Steca Tarom /Power Tarom is directly connected to the battery, just as the DC bus is. Using a shunt, the Steca PA HS200 (E), which is situated on the minus cable attached to the battery, the battery current is measured and this information is passed on to the Steca Tarom / Power Tarom (B). Further components, such as an inverter or the Steca PA 15 remote control, are directly connected to the DC bus. In order to automatically start a diesel generator (G) if the battery’s state of charge (SOC) falls below an adjustable threshold, the output of the Steca PA 15 is connected to a relay. The normally open contact of the relay switches the diesel generator on, and subsequently switches it off again.

The Steca Tarom / Power Tarom controls the DC hybrid system. The Steca PA HS200 current sensor (E) transfers all infor mation on the charge and discharge currents at the DC bus to the Steca Tarom / Power Tarom. With the aid of this data, the controller is able to calculate the current state of charge of the battery. This information is transferred via the DC cabling (powerline modulation) to all connected Steca PA 15. Every Steca PA 15 can be independently configured to a certain switch-on and switch-off threshold of the state of charge.

This system allows for automatic energy management which gets optimum use from the available solar energy, maintains the batteries reliably, and ensures electricity supply around the clock.

Both single-phase and three-phase hybrid system concepts are based on the same principles of energy management. With the help of the Steca PA HS200 current sensor, the charge and discharge currents of the components, such as slave Taroms / Power Taroms, inverters etc., are determined and communicated to the master Tarom / Power Tarom. Based on the calcu­lated state of charge of the battery, the Steca PA 15 switches the extra generator on or off. The three single-phase inverters switch off if the voltage falls below a given threshold in order to protect the battery from deep discharge.

With very large load requirements, AC-coupled hybrid systems can provide a sensible alternative to the very effective and cheap to implement DC hybrid systems. This topology is beneficial if the largest part of the loading is required on the AC side (L) during the day. Steca AC hybrid systems can be implemented using the Steca grid and sine wave inverters (B and C).

Steca droop mode
When the batteries (H) have reached the cut-off voltage, they can no longer fully take up this power difference. There is then more output available in the system than can be used. The battery inverters (C) then activate the Steca droop mode.

With very large outputs, this kind of Steca AC hybrid system can also be designed as a three-phase system in order to supply corresponding loads directly. Here the StecaGrid grid inverters (B) provide direct three-phase feeding on the AC side.

The required bi-directional Steca Sinus inverters Steca Xtender (C) can be used in both single-phase and three-phase cases. Up to three devices can be connected in parallel per phase. This means that a total of 24 kW per phase is available, with a maximum of 72 kW in three-phase operation.

Diesel generators (G) can be used to produce approx. 100 kW, while grid inverters (B) are used for up to 70 kW. Thus, loads of up to 70 kW can be supplied. The power per phase of the grid inverters must not exceed the rated power of the Steca Xtender(s) in a phase.